Winds of Change Blowing Through Beautiful Little St. Francisville
By Anne Butler
St. Francisville, that little Louisiana river town with the well-established sense of place, has done it again. A staple on lists of favorite small towns across Louisiana and even throughout the state, most recently it has been recognized nationally by Architectural Digest as one of the most beautiful small towns across America! This prestigious magazine chose what it called “magnificent microcultures” in the mountains, at the seaside, and all over the country, and its choices reflected history, natural beauty, the arts, architectural treasures, and especially culture. As one old New Orleans state legislator was fond of saying, “If ya ain’t got culcha, ya ain’t got s@#$.” And St. Francisville, with its wonderfully preserved residences and commercial structures, its historic churches, its moss-draped live oaks and colorful azaleas, plus its burgeoning population of artists and writers and musicians and other creative souls, has got “culcha” in spades. 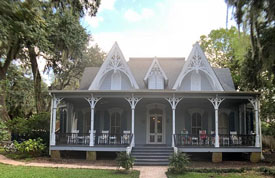 But don’t think this little town is static. The winds of change are blowing all over the place, starting at the only traffic light in the downtown the historic district, where new owners are bringing fresh ideas and new enthusiasm to the vintage St. Francisville Inn. This charming Victorian gem, veteran of nearly four decades of hospitality, was purchased in October by Jim Johnston and Brandon Branch, best known to Bravo fans of the docu-drama Southern Charm Savannah.

Branch, who has roots in Louisiana and Mississippi, was the former creative director for Paula Deen Enterprises and hence will focus on the interior decorating as well as food and cocktails, while Johnston, whose background is in accounting, handles the computer systems and technical aspects of construction. The creative couple is bravely undertaking what they call a “million-dollar multi-year renovation to restore the inn and increase services to become the area’s first four-star inn.” Initial phase of the project, which should be complete by mid-April, involves new landscaping, restoring wood flooring, repainting and redecorating the main house, followed by gutting the overnight rooms, building new owners’ quarters, installing a commercial kitchen and bar, perhaps even increasing the number of guest rooms and adding a conference center. Big plans for these world travelers, and a perfect place to showcase their complementary talents.

Next door, the Lebanese restaurant has expanded with new ownership, redecorated using paint maven Ellen Kennon’s cool colors and enlarged the dining areas both inside and out, with an expanded emphasis on Greek as well as Lebanese cuisine. It is now called Café Petra; an early morning fire on Halloween will unfortunately involve some downtime. 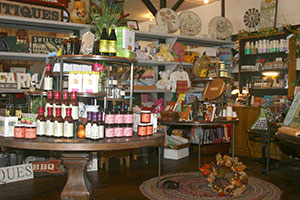 A few blocks down Ferdinand St., the main thoroughfare leading straight downhill to the Mississippi River, in the 1890s German immigrant Morris Burgas established a fine general merchandise store in a rambling wood-frame building. For a century or so, several generations of the same family provided the necessities...everything from planting supplies to household goods, buggies, even coffins stored next door...for the surrounding plantation country. New owners Charlie and Onnie Perdue refreshed and revitalized this same building just in time for August’s late-night shopping extravaganza, Polos and Pearls. They’re calling their operation District Mercantile and following the established tradition of something for everyone...gifts, décor, antiques, artworks, books, collectibles, clothing, old-time candy and games. They even serve coffee and breakfast goodies, hoping to provide a comfortable and relaxing community gathering place.

Across the street are popular ladies’ clothing shops and a fine little indie bookstore that hosts book signings by real live authors, children’s story hours, a new children’s book festival (as well as being involved in several adult literary festivals that draw hundreds of readers and writers to the area).

Another business with a new owner is The Shanty Too, longtime downtown anchor and the first to offer gourmet candies and old-time favorites in its cute little old-fashioned candy shoppe called Mandie’s Candies. The late Fay Daniel, founder and longtime owner, dubbed the shop’s inventory “gifts and fancy goods,” which covered a lot of territory, including large selections of Flax linen clothing, iconic christening gowns, seasonal and decorative items, and much more.

Change is not limited to the historic downtown area; out along US Highway 61, The Hotel Francis ‘ interim manager Bob Wilson promises the “very committed” owner is giving his property “a lot of TLC,” from sprucing up the landscape and lovely lake to new flooring in common spaces, exterior painting, and renovating and replacing carpeting room by room in a facility that saw some hard usage by long-term Hurricane Katrina evacuees.

A recent visitor to the area from Canada, who produces a food program on television and was a close friend of Anthony Bourdain, commented that The Francis Southern Table and Bar served some of the best seafood he’d ever eaten, and he was equally impressed with the selection of gourmet cheeses at the Audubon Market across US 61. The market also serves delightful plate lunches, and there are other nice eateries along the way as well: The Francis Smokehouse for specialty meats and barbecue, Mexican specialties at Que Pasa, country cooking at Audubon Café, Chinese at East Dragon. 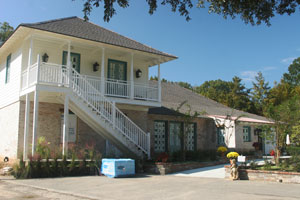 The Myrtles Plantation has seen some wonderful improvements since young Morgan Moss took over the direction of the property from his parents, with an eye toward community involvement and enhanced entertainment rather than straight history and paranormal activities. Attractive new landscaping, new shotgun B&B cabins, and an enormous new eatery called Restaurant 1796 set to open this winter showcase the new emphasis on hospitality. Executive chef Ben Lewis, Woodville native, was happily cooking in the Virgin Islands at Longboard Coastal Cantina until Hurricane Irma devastated the place. Now he will “bring his expertise to deliver a wood-fired farm-to-table concept with a seasonal menu, revolving around locally sourced produce,” much of it growing right on site. Besides the love of food, he believes cooking is all about the joy it brings to guests, a sentiment that fits right in with The Myrtle’s new focus.

Located on US Highway 61 on the Mississippi River between Baton Rouge, LA, and Natchez, MS, the St. Francisville area is a year-round tourist destination. A number of splendidly restored plantation homes are open for tours: The Cottage Plantation (weekends), Myrtles Plantation, Greenwood Plantation, plus Catalpa Plantation by reservation; Afton Villa Gardens is open in season and is spectacular. Particularly important to tourism in the area are its two significant state historic sites, Rosedown Plantation (a National Historic Landmark) and Oakley Plantation in the Audubon state site, which offer periodic living-history demonstrations to allow visitors to experience 19th-century plantation life and customs.

The nearby Tunica Hills region offers unmatched recreational activities in its unspoiled wilderness areas—hiking, biking and especially bicycle racing due to the challenging terrain, birding, photography, hunting. There are unique art galleries plus specialty and antiques shops, many in restored historic structures, and some nice restaurants throughout the St. Francisville area serving everything from ethnic cuisine to seafood and classic Louisiana favorites. For overnight stays, the area offers some of the state’s most popular Bed & Breakfasts, including historic plantations, lakeside clubhouses and beautiful townhouses right in the middle of St. Francisville’s extensive National Register-listed historic district, and there are also modern motel accommodations for large bus groups.